Shark Fin™ is designed to have singulated boards put onto lugs on the grading table and automatically turn the boards over in front of each grader. This is a “no touch” system except where the grader is required to physically put a crayon mark on each board. Shark Fin™ is a totally non-mechanical board turning system not driven by gears, chains, belts or anything else. This system is inertia driven where the board helps to turn itself as it is pushed along the line by the lugs. 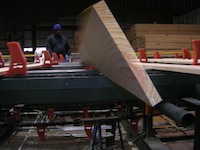 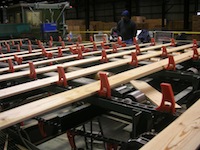 GRADER BENEFITS
Shark Fin™ turns the boards for you and it is ergonomically correct. Then it gives the board back to you. You can concentrate on grading instead of material handling. However, you can still touch the board throughout the turn if you wish.

Visit the Shark Fin Website for videos and more information. 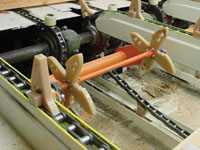 TESTIMONIALS
“I’m proud of this installation and happy to show it off!!”
“The equipment started up Monday morning running at an incredible 10% more production and by the end of the day production was almost double that”. Also, “this was one of the few times where equipment installed has done what was expected of it on start up”.

“We have installed Shark Fin Board Turners at both of our grading stations, in September 1998.  We selected the Shark Fin Board Turner because of it’s mechanical simplicity and it’s hassle free versatility.  We are happy with this system, and we strongly recommend it.”
“The payback on our board turner project was entirely based on lowering our WCB Premiums.  With the shark fin, 6 of our senior graders could come back to work.  The minimum estimated savings for us (at the time we asked Alliance for the money) is $100,000/year.

Just a quick note to let you know of our status re: the Shark-Fin Board Turning System that we installed in November of this year. If you remember there were some who stated that your system would not work for us because we wanted your system for four graders working in less than 17′ of total space. We pull up to seven grades and our normal product mix covers 1×3 – 1×6, 2×3 – 2×10. I’m pleased to report that your system works just fine and we are very happy.  Prior to installation we had problems with graders going on light duty due to injury. Since we’ve installed the board turners all of our graders have returned to work and are happy with the system. In fact it’s the first time I’ve seen graders smile when running 20′ 2×10.

We would like to inform you that the shark fin board turner recently installed at our planer operation has been a great success and accepted by all our lumber graders.  The system is so simple and maintenance free.  The Worker’s compensation Board visited our plant recently and were very impressed with the system. They asked for our permission to take pictures and would also like to write an article for the monthly magazine. We at the Lakeland Mills would like to thank you for your assistance during the installation.

NC, who installed the new equipment at Robinson. He is quoted as saying…”The most important thing that we installed was the patented Shark Fin Turner…which allows one or two graders to look at up to 60 boards per minute if need be” Dugger said “Before, they were only grading about 40 boards per minute” George Robinson (Owner) says…”We basically have a state of the art system that allows the Grader to only take the time to look at the board rather than try to measure the board and do other things.  The grader has a lot more freedom and can grade more lumber.  For our company to get the return we needed, we had to get more lumber through our system”  Production was boosted from 30,000 to 45,000 board feet per day.
“The equipment started up Monday morning running at an incredible 10% more production and by the end of the day production was almost double that”. Also, “this was one of the few times where equipment installed has done what was expected of it on start up”.

From National Hardwood Magazine.
From an article on Robinson Lumber, Bill Dugger owns Automated Lumber Handling Co in Lenoir
PDF Brochure
Quote Request Form
Part Order Form
Application Photo Album
Cookies
We serve cookies. If you think that's ok, just click "Accept all". You can also choose what kind of cookies you want by clicking "Settings". Read our cookie policy
Settings Accept all
Cookies
Choose what kind of cookies to accept. Your choice will be saved for one year. Read our cookie policy
Save Accept all